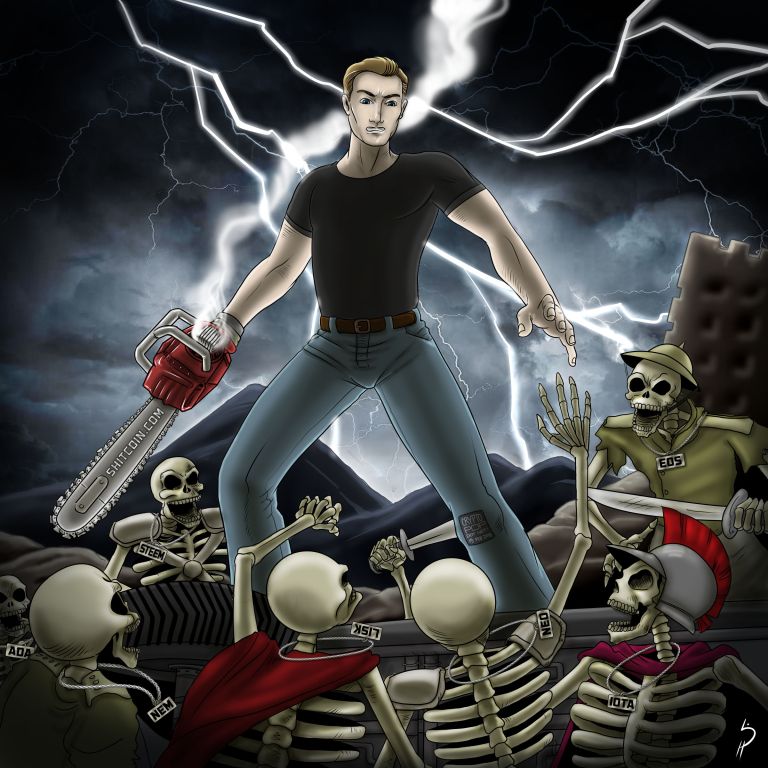 Andreas Brekken is a friend from San Francisco who has been an active member of the Bitcoin community since 2011. He runs the controversial blog Shitcoin.com, from which he performs technical reviews of various altcoins and (sometimes … most times?) rips them apart. I don’t always agree with everything that Andreas says on his blog or Twitter, but have always found his technical insights valuable and worth considering.

(I’ve been inspired enough by his recent reviews to compile some of the altcoin reference wallets myself, although in all honesty, my engineering muscles have atrophied significantly over the last year. I’m not sure how far I’d actually get before becoming too annoyed to continue.)

When he commissioned me to do this piece, his first idea was to be “standing on top of a giant waste pile of shitcoins that has the words http://shitcoin.com written on it. It doesn’t hurt if I have an AR-15 with grenade launcher attachment, women in bikins, a “http://shitcoin.com ” gold chain and an apache helicopter.”

Cheeky Duke Nukem imagery notwithstanding, I liked the idea of our hero standing alone against an onslaught of altcoins. Immediately, my mind went to the classic Army of Darkness poster from 1992. It was an epic image — punchy and really over-the-top and just the right kind of reference for a Cryptopop parody.

(Side note: This design solution also allowed me to avoid rendering the AR-15 assault rifle in Andreas’ original idea. I’m not a big fan of guns and I’ve actively avoided drawing them in any of my cartoons. When the subject matter absolutely calls for it, as was the case with Jimmy Song and Joseph Lubin’s respective Wild West portraits, I render the guns holstered instead of drawn.)

(Side note of a side note: brownie points if you can find the only gun I’ve ever cartooned on Cryptopop that was actually pointed at someone.)

If you’re a member of the crypto community, and would like to commission your own Cryptopop portrait, @mention me on Twitter at @helloluis.

If you liked this or any of my other cartoons, a small tip would help me dedicate more time to this hobby.

Crypto Pop is a personal project that brings together my two favorite things: cryptocurrencies and pop culture. If you like the stuff that you see here, please share it with your friends! Follow me at @helloluis or email me at lbuenaventura2 AT gmail DOT com.

If you like my cartoons, consider donating via Bitcoin! 14uGaGR1bv8YUy4uyi2MiZbTfT4t9DLwGB